Notice: You have to finish Getting Started and Installing the ROSRider Software before following instructions on this document.

You have to have robot.launch file launched, before using any of these programs.

To run these examples in simulation, consult to GAZEBO

To run the program, with default speed, kp, and tolerances, execute the following commands:

Reads a file, consisting of waypoints, and follows the trajectory of these waypoints in infinite loop. Arguments are:

file consists of a file path that has x, y coordinates of points, terminated by new line. Example file:

To run the program, execute the following commands:

Will make the robot follow an ellipse trajectory, as given by e0.txt file.

Paces the robot between two points, using goal controller. The goal controller has to be on for this program to work, which usually happens when you launch robot.launch

With default parameters, the pace.py progrma will make the robot go between point(0,0) and point(2,0)

This example uses odometry only. If you are using EKF please adjust goal controller to use /odometry/filteredinstead of /odom

While the pace.py makes the robot go between two points, loop_goal.py reads a list of goals from a file, and executes the goals in a loop. rosrider_examples/data/goals.txt is an example goal list. The following line defines a goal:

Follows a yellow line on background. When there is no more yellow line, the robot executes a 180 degree turn, using goal controller.

Notice: In order to launch the robot_cam.launch you need a camera attached and configured to your robot.

To see a video of robot in operation, click the image below: 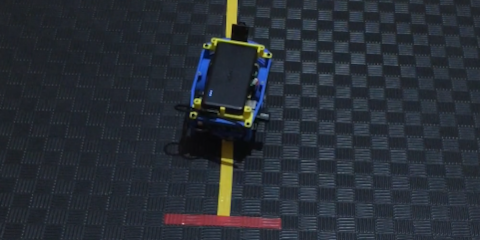 To see the ROS Console, while the robot is in operation, click the image below: 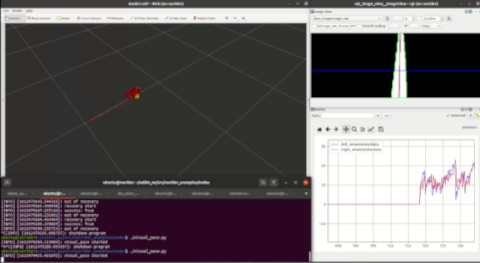 This example consists of two nodes, line_detector which detects the line by using image processing and line_follower which drives the robot getting /line_data from the line_detector node.

You can configure kP, kI, kD for the line following PID algorithm, as well as cruise_speed, terminal speed.