Each mask is eroded and then dilated to get rid of noise, and then canny edge detector runs on mask, which are combined together to form a RGB image. This RGB image contains yellow, white and red edges in each channel, and published at /camera/filter_image

~debug: if True is specified, will display the color filtered image, and the edge image. This is useful when tuning.

Filter Image
Colors yellow, red, and white are filtered with their HSV ranges, and masked. Using rqt_reconfigure you can select the ranges according to your lighting conditions. 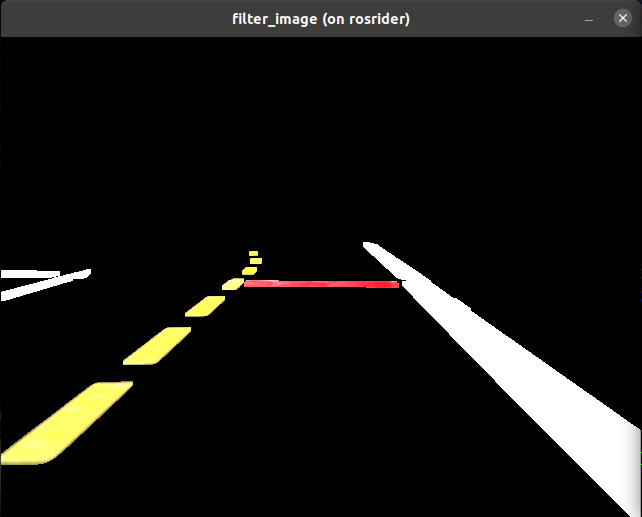 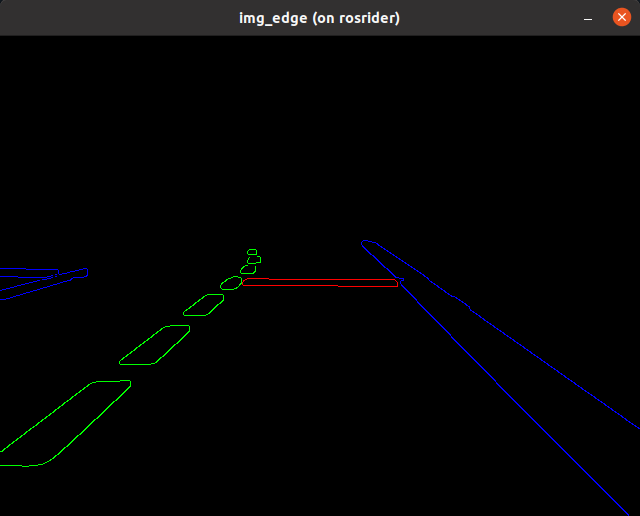 After starting the color_filter with _debug:=True argument, open another terminal and execute:

The reconfigure window will pop up. We filter between the low and high of each channel, for each detected color. yellow_h_low and yellow_h_high are yellow detectors, H channels, high and low respectively.

Remember we are operating on the inverse HSV of the image, i.e. the input image is inverted first.

Try to select a broad range, so when the robot moves, or light conditions change, it will still be working. You might also play with lighting conditions. 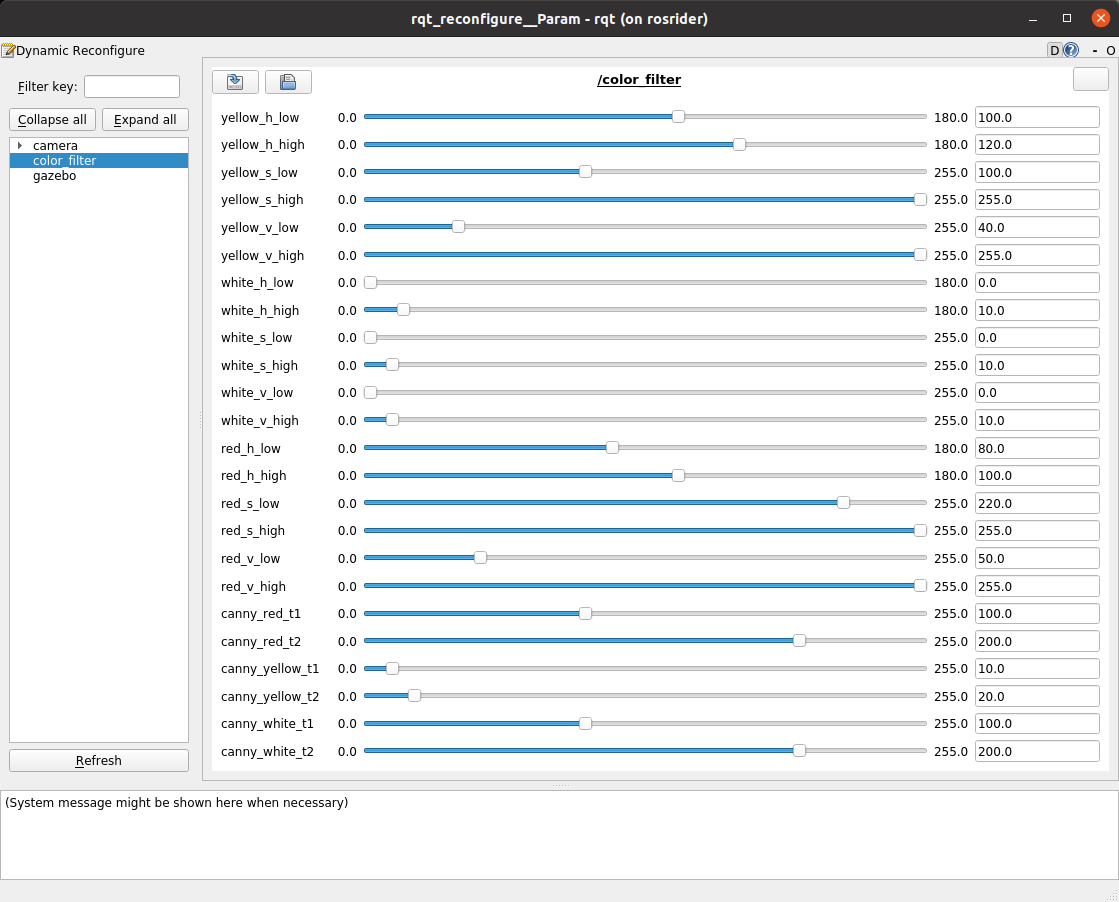 After lines are detected, each line's slope is measured, and whether they will be used for the calculation of lane is filtered accordingly. In the image below, The lines that are 1px wide are lines that will not be used for determination of lane, since they are horizontal, i.e. slope < 0.5. So these lines are drawn as 1px lines, and the others are drawn as 2px lines. 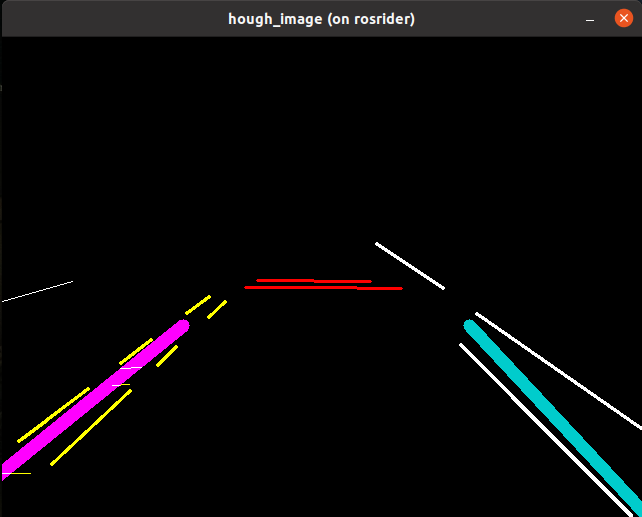 Open a terminal and execute:

The reconfigure window will pop up. For each channel, we have rho, angle, minThreshold, minLineLength, and maxLineGap. 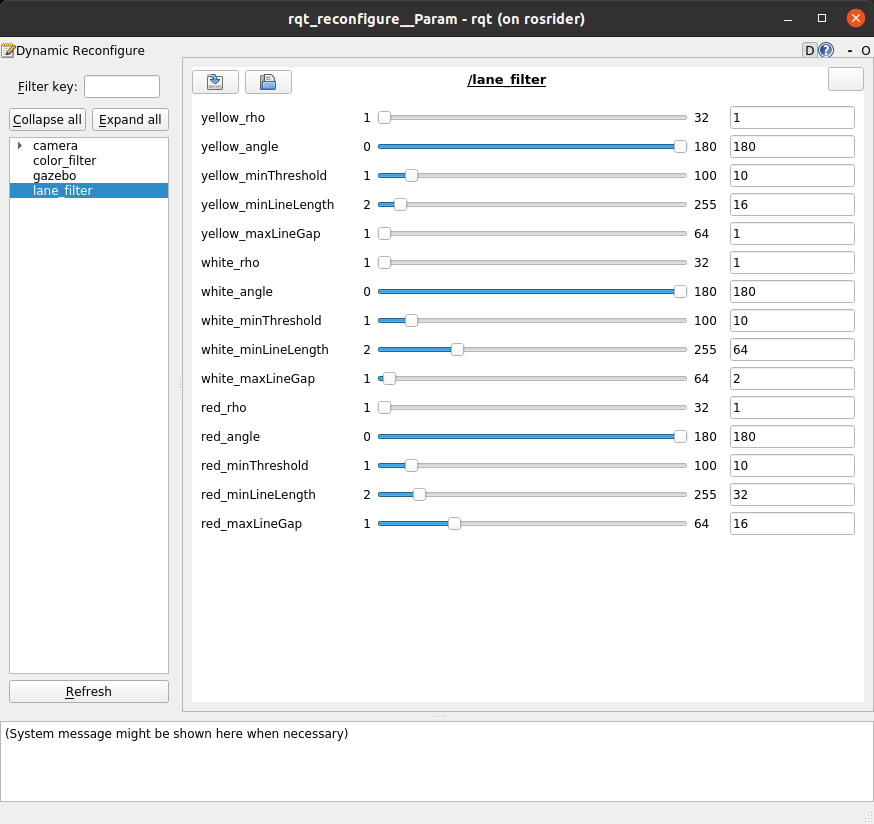 min_threshold determines the number of votes for the line to be valid.

minLineLength determines the minimum length of the detected lines.

maxLineGap determines how many pixels of a gap there can be between two lines, for them to be considered single line.

At the beginning start with rho=1, angle=180, and min_threshold=10 for each channel. Adjust minLineLength first, increase in order to filter out small lines. Then adjust maxLineGap in order to join split lines together.

You might want different parameters for different colors, the white lines can have a longer minLineLength i.e. Adjust minLineLength and maxLineGap for each channel until detection is done efficiently at all around the tracks. Move your robots to different locations to see if the calibration parameters hold for those conditions

First obtain the calibration_pattern and print it on 2 sheets of A4 paper. Then place your robot as shown in the picture below: 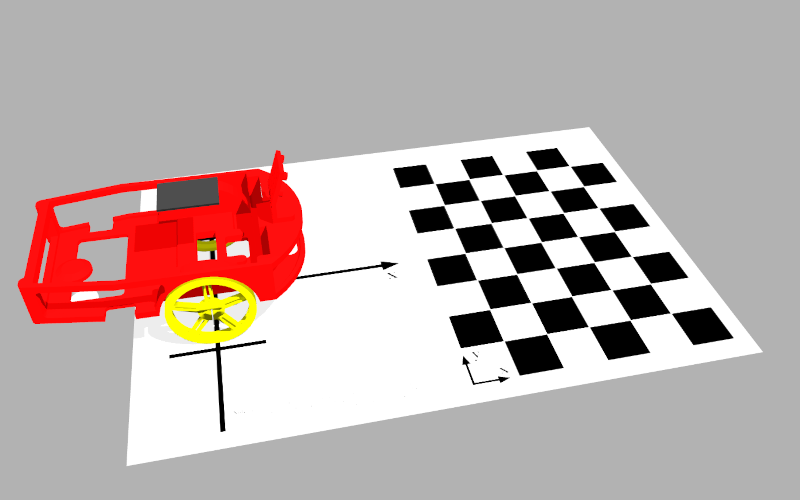 Assuming that camera is already launched, we run:

You will see the following windows:

There is also h1 and h2, although those parameters are optional.

Adjust h1 to see further in birds image view. Increase h1 to somewhere between 40 and 60, and then retune t1 and t2 to get parallel lines again. Adjust h2 to change view angle towards the robot.

After the desired output is achieved, look at the window that you are running the homography_calibration, you should see it is constantly printing a 3x3 matrix. Copy the values and save it in a file. 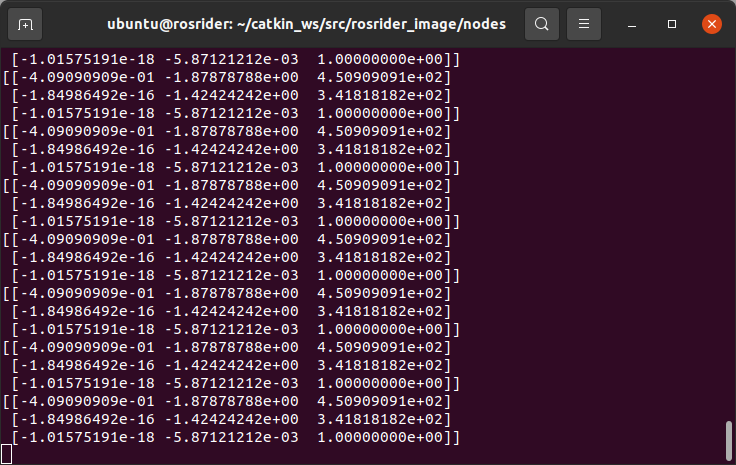 Find the where the h matrix is defined:

Plug in the values that you have obtained in the previous steps. (it requires inserting commas)

And then from another window run:

You will see the birds eye view from the camera. 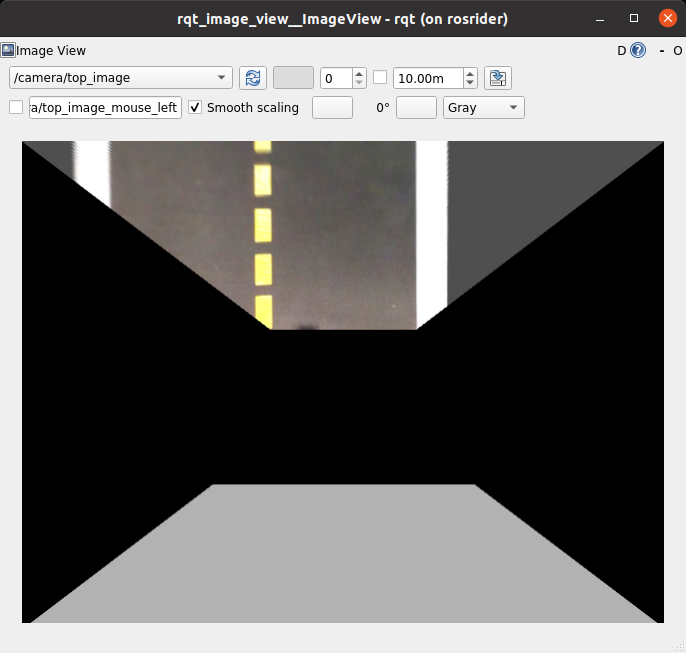 Here is another setting for the same filter. As you see, the closer we are to the camera, the more information the image has, and as we go further way from the camera, we have less information about the texture. In the code there is the self.h matrix for normal operation, and self.H matrix for far operation. 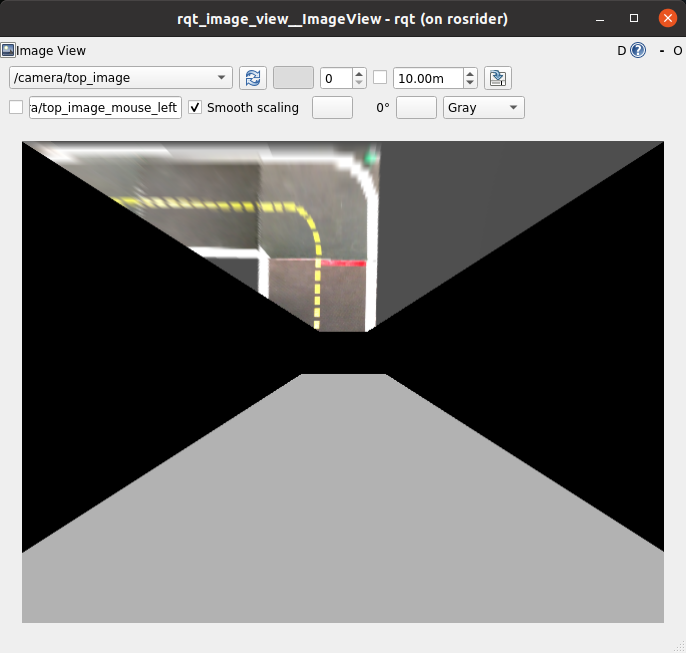 Each imaging filter has the private ~input parameter, that allows to select which image to process.

Here is an example pipeline:

The third node, birds_eye_filter by default listens to /camera/image_raw but however in this pipeline we define the input parameter for to listen to /camera/filter_image.

You can also remap the output of any filter using <remap>, and sequence filters in any order, thus creating image processing pipelines.